This article provides an overview of heat detectors, carbon monoxide (CO) detectors and multi-sensor detectors, which are all fire alarm initiating devices. We'll explain what they are, how they work and where they are used. In commercial fire alarm systems, initiating devices play a critical role of detecting an active fire and dangerous level of carbon monoxide as well as monitoring the sprinkler system to ensure that it's in proper working condition.

While the combination heat detectors are gaining more traction, fixed temperature heat detectors are still the most commonly used heat detectors you’ll see in buildings. When activated, heat detectors will transmit an alarm signal to the Fire Alarm Control Panel (FACP), which will alert the occupants to leave the premises using audible and visual alarm devices. The monitoring center will also receive the alarm signal and call the local fire department to dispatch emergency responders.

CO detectors monitor carbon monoxide levels. Carbon monoxide is called the “silent killer” because it’s odorless and colorless yet highly lethal. CO is produced during incomplete burning of carbon fuels (think running cars with gasoline engines, oil- or gas-based heating systems or generators). CO detectors operate by measuring the CO level, which is measured in parts-per-million (ppm), over a time period. The higher the ppm of the CO level, the shorter the allowed time period before an alarm is initiated. While where and how to install CO detectors for commercial buildings depends on local codes, CO detectors are typically required in hotel rooms, schools, rooms or floors that contain CO-producing equipment, and in indoor garages.

Similar to smoke and heat detectors, CO detectors transmit an alarm signal when activated and fire trucks will show up at the location. But an alarm signal from CO detectors doesn’t cause the FACP to activate the notification devices. Rather, CO detectors have a local sounder that emits a unique “temporal four” tone, meaning each tone cycle has four on-and-off sequences, followed by a five-second silent period, then repeats (hear the CO detector temporal four tone). Having a distinct CO alarm sound allows people in the affected area to differentiate it from the fire alarm sound and take appropriate actions, such as opening windows and evacuating the affected area. 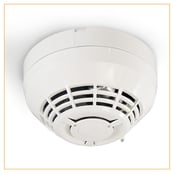 Multi-sensor detectors, also called multi-criteria detectors, combine one or more fire detection technologies into a single device. By using multiple sensors — for smoke, heat and carbon monoxide — these devices can provide more accurate fire detection, reduce false alarms and simplify installation. While multi-sensor detectors come in all combinations, the combination we install the most is smoke and CO. This is because smoke and CO are useful in spaces that require both detectors, such as hotel rooms and schools.