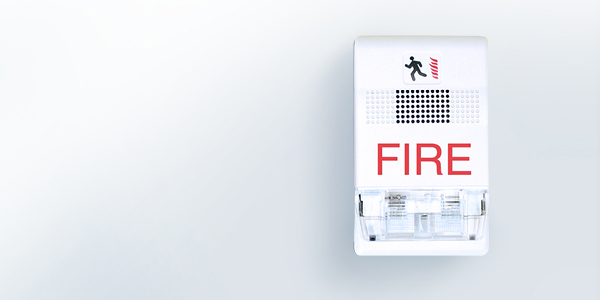 This article provides an overview of different types of fire alarm notification devices, which alert the building occupants to evacuate the premises or relocate using both audible and visual alarms when the fire system detects a possible fire. The most common notification devices installed today are strobes, horn strobes, speakers and speaker strobes. 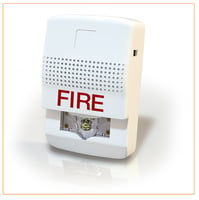 Strobes provide synchronized flashes to alert the hearing-impaired occupants to evacuate the premises. Typically installed on the walls or ceilings, each strobe device has a candela rating, which is a base unit of luminous intensity. The higher the candela rating of a strobe device, the larger its coverage area. 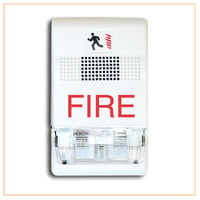 Horn strobes combine audible and visual alarms to alert the occupants to evacuate the premises. The strobe portion works as described above. The horn portion emits a classic “temporal three” tone, meaning each tone cycle has a three half-second on-and-off sequence, followed by a 1.5 second silence (click to hear the temporal three tone). When programmed to be used in the public mode (notifying the entire building to evacuate), the horn’s alarm sound must have a higher decibel than the average ambient sound and a higher decibel than the maximum ambient sound that lasts at least 60 seconds. 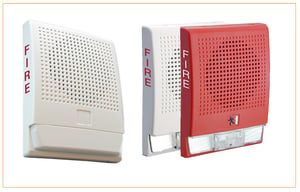 Speakers and speaker strobes are notification devices used in voice evacuation systems. Voice evacuation systems are required by code in certain occupancy types. For example, in New York City, assembly spaces where a large number of people gather, large office or retail spaces greater than 100,000 ft, high-rise buildings and nursing homes all require a voice evacuation system. During a fire emergency, speakers and speaker strobes will emit a unique tone, followed by live voice instructions. Similar to horn strobes, the alarm sound emitted by speakers must have a higher decibel than the average ambient sound and a higher decibel than the maximum ambient sound that lasts at least 60 seconds. However, speakers and speaker strobes must also pass the “intelligibility” test to ensure that the voice can be understood clearly by the building occupants.